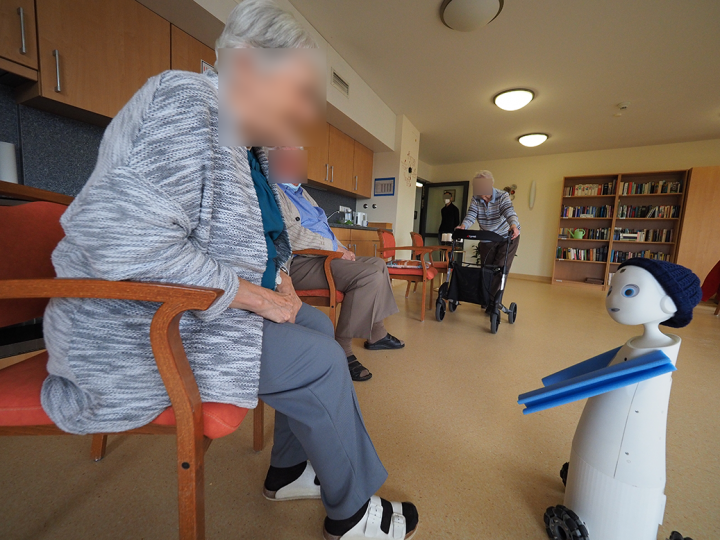 In the last few months, we have done initial field tests with our Wizard-of-Oz prototype. We used it in nursing homes and a pediatric clinic with autistic children.

A Wizard-of-Oz prototype is not autonomous but is controlled remotely. For this purpose, we can remotely control the robot with a browser interface on the laptop via WLAN.
During the tests, we sat in the next room, saw and heard what the robot saw and heard via the browser, and controlled facial expressions and movements via keyboard. As if using a telephone system, we were able to let the robot speak with our voice via a laptop microphone, changing the pitch of our voice.

The aim of these tests is to see whether and how test persons react to such a novel product. Do they want to interact or are they afraid. What do they ask the robot and what interactions work well.

During our first test in a nursing home, we were able to determine directly that the acoustics of the overall system were not yet good enough. Reverberation in the rooms, insufficient speaker power and hearing loss among the test subjects made interaction very sluggish. After we were able to solve the problems quickly, we were able to test different forms of interaction in further tests. Typical UseCases are getting to know each other, questions about well-being, language games, quizzes, arithmetic problems, farewells, etc.

In summary, we can state that elderly people do not shy away from interaction with a robot at all. On the contrary. It is fun for them, they are very curious and wish to come back soon. They especially like the cute look and facial expressions. And it is a welcome change in the otherwise rather monotonous daily routine.

With the children with a relatively high degree of autism, we found that verbal interaction, as we had imagined, was virtually impossible. Nevertheless, according to their caregivers, the children reacted surprisingly strongly and positively to the head and, in particular, facial expressions and eye contact.